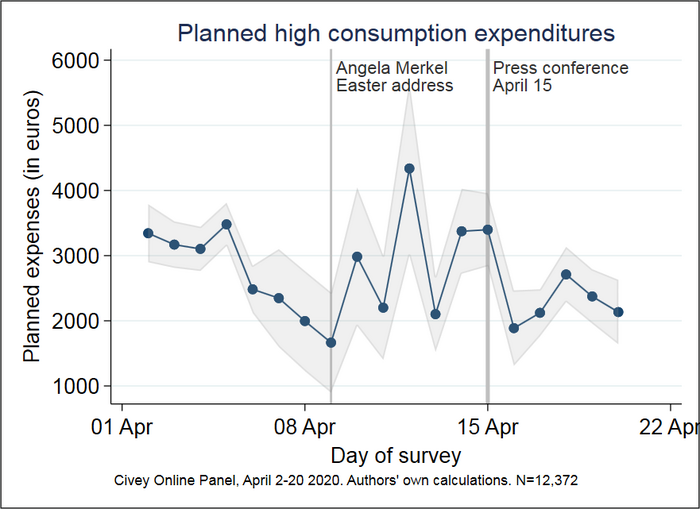 Are we still in lockdown? How long will it last? At the present stage – late April, 2020 – the increasingly differentiated set of policy measures makes it harder and harder to give a concise answer to these questions. Every day, new policies target finer and finer pockets of economic and social life. Expectations about future policy responses to Covid-19 are becoming highly differentiated, too, as they relate to the new variety of issues. This not only generates new challenges for economic agents but also for the expectation management that policymakers engage in. As a vast sea of analyses and opinions on all kinds of policies becomes available, communicating about the policies turns into a cacophony. Are policymakers able to receive the public’s attention in the middle of this cacophony?

In a new discussion paper, Haan et al. (2020), we find evidence that at least until recently, the answer is affirmative. The general population in Germany indeed listens to Germany’s policy makers. In order to measure the movements of expectations with enough time precision, we conducted a daily online survey of expectations held by a wide sample of people living in Germany. The respondents report their forecasts about the lifting of restrictions of public life, especially school openings and large public events. We also ask about planned non-routine consumption expenditures. Our data analysis covers a time period during which Chancellor Angela Merkel made two widely broadcasted public appearances. The reported expectations suggest that Merkel’s statements have a strong effect on the public, especially in an appearance that she made after her meeting with the German ‘Länder’ prime ministers on April 15, 2020. In this meeting, Merkel and the prime ministers sent a rather cautionary message (“zerbrechlicher Zwischenerfolg”). Immediately after the appearance, expectations about school openings became significantly more pessimistic and the households’ planned consumption expenditures fell sharply. The figure illustrates the evolution of the average of reported expectations about the date when the majority of school children is back in the classroom (left panel) and the evolution of the amount of non-routine expenditures that are planned in the next three months (right panel). Merkel’s public appearance on April 15 is marked by the second of the two vertical lines in each panel. Both time series indicate a dampening of expectations after Merkel’s statements.

Note, however, that an earlier statement by Angela Merkel, her Easter Address to the German population on 9 April, 2020, appears to have had the opposite effect. There, she showed more optimism and, subsequently, the time series we recorded become more optimistic, too, at least for a few days. Overall, the statements made by Angela Merkel appear to affect the German public’s views quite strongly.