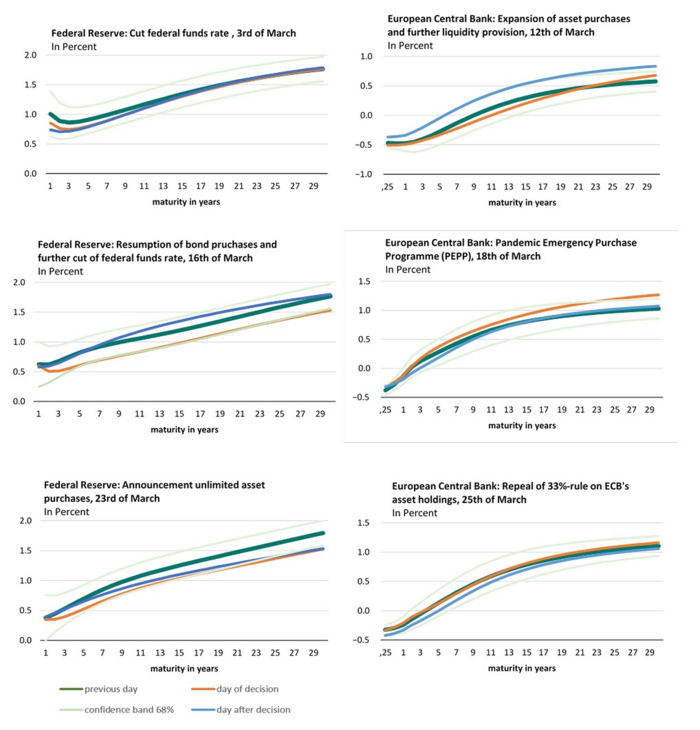 The European Central Bank (ECB) and the US Federal Reserve (Fed) initiated far-reaching monetary policy measures to counteract the economic consequences of the corona-crisis (Table 1). Although the ECB and the Fed took quite similar measures, the initial monetary policy situation in the Euro area and the United States were noticeable distinct, which might affect their effectiveness.

As the transmission process takes some time, it is not yet possible to fully assess the effectiveness of monetary policy measures to stabilise prices and the economy as a whole. However, in Bernoth et al. (2020), we provide initial insights into whether and how these measures have affected the yields of government bonds with different maturities. The analysis is based on an event study approach.  We expect an effective monetary stimulus to lower market interest rates on loans, thereby supporting lending and overall demand.

The analysis has three key findings:

There are various explanations for why the ECB's measures had only a limited effect on interest rates, in contrast to those of the Fed. One reason could be the ECB's very narrow scope for further monetary policy stimulus. In contrast to the US, the Euro area was still in the low interest rate environment after the Great Recession. Another explanation is that market participants were initially disappointed with the ECB's actions. For example, the effect of the Pandemic Emergency Purchase Program was muted when it was announced, as the emission limit was still in force at that time and the buy-up limit for some countries had already been reached before the corona crisis began. Nevertheless, it can be assumed that the ECB’s provision of sufficient liquidity to the banking sector in the near future will help to cope with the second-round effects of the crisis, such as a large number of non-performing loans.

In view of the already very expansive monetary policy, however, the central banks' room to maneuver is generally limited. This makes it all the more important that monetary policy steps are flanked by targeted fiscal policy measures that stabilize aggregate demand and supply. In the Euro area, solutions must be found quickly, especially for distressed crisis countries such as Italy and Spain. Instead of wasting valuable time with lengthy political debates and introducing Eurobonds/corona bonds as a European response to the economic consequences of the coronavirus pandemic, we should consider rapid financial support in the form of direct transfers, which is explicitly allowed under Article 103a of the Maastricht Treaty in the case of exceptional events beyond the countries’ control.

Figure 1: Daily changes in the par yield curves of government bonds in the euro area and the USA